We began with a brief overview from Peter of the inspiring “quintessentially American” story behind DAOU Family Estates, and how it came into being. Born in Beirut, the Daou family left Lebanon during the civil war, ending up in France, before the two brothers moved to California, excelled in the business world, and the rest as they say, is history. In 1998 after taking their company public, the brothers pursued a dream that had been developing for them when they were in France. Daniel knew he wanted to be a winemaker, had been studying every book he could find on winemaking and knew it was finally time to start a winery. Everyone told him he was crazy, but with Georges as his business partner, Daniel told his father Joseph of his ambitions to make some of the best wines in the world. Without hesitation, Joseph told him: “Go and don’t look back – go full throttle”.

Peter then welcomed Daniel, who gave our attendees a thorough overview of the terroir of Daou Mountain. He explained that in 2007, after around eight years of research all over the globe, the Daou brothers finally found their dream property for their project on the west side of Paso Robles, which is located right between Los Angeles and San Francisco on the central coast of California. Rather than choosing to plant in Napa, or Sonoma, as many expected, Daniel explained that they chose Paso as it is unlike anywhere else in the winemaking world, due to its unique combination of its soil and climate.

The west side of Paso Robles is blessed with the type of calcareous clay soil found in the greatest appellations including Bordeaux and Burgundy, whereas elsewhere in California the soils are clay-based, loamy, sandy or volcanic. Daniel explained in detail why these calcareous soils are so key – providing freshness and minerality to the wines, as well as permitting dry farming, and allowing the creation of wines that have not been adulterated by additions such as tartaric acid.

Paso Robles is five times the size of Bordeaux at 614,000 acres, and larger than Sonoma and Napa combined, so it is no surprise that the climate is incredibly varied. A combination of southeast and southwest orientation, a 2,200 foot elevation, steep slopes, a cooler microclimate, and marine influence from the renowned Templeton Gap (14 miles from the Pacific Ocean) create perfect growing and ripening conditions for high quality grapes. For most of the summer, DAOU Mountain’s vineyards stand above the frequent morning fog line, allowing the vines up to 14 hours of nourishing sunlight. The mountain also receives two to three times the rainfall of downtown Paso Robles, and is the perfect temperature between Napa and Pauillac that allows the grapes to ripen without the wines being jammy. It is this, Daniel continues, that helps explain the balance and freshness of DAOU’s wines, and he goes on to demonstrate that consumers, especially drinkers of Californian wine, are beginning to notice and appreciate the elegance of this new wave style of Californian wines coming out of Paso Robles, which are far more approachable on release.

Family is hugely important at DAOU, with all of the family involved in the business, and the experience of the Daou brothers has undoubtedly shaped the project today. Daniel explains that Lebanon gave them “the heart”, France gave them “the discipline” and America gave them “the opportunities”. Daniel’s passion for his craft is truly inspiring, it is his sixteenth harvest this year and he gets as excited about it now as he did about his first. He describes it as “a love affair that keeps growing every year and gets deeper and deeper as time goes on.”

This is the product of perhaps the greatest vintage so far at DAOU with a successful harvest, and has spent a relatively short five months in French oak of which 30% is new. Open on the nose, with attractive tropical fruit, and orchard fruit including fresh pear, as well as a touch of something floral, and of course some light hints of toast. Full, round and rich in the mouth, with ripe tropical flavours, sweet apple, and a lick of citrus. Generous, powerful and with a long finish, for Peter this is an excellent modern and authentic Californian Chardonnay, which doesn’t try to imitate Burgundy.

Also from the exceptional 2019 vintage, this is undoubtedly a step up from the first wine tasted and has spent almost a year in 50% new oak. Even in the glass we can see the body and texture, and from the first smell we can detect more power, ripeness and oak influence, which is balanced by a citrus note. On the palate it shows more overt oak, but this is very well integrated, providing a smooth and rounded mouthfeel. Balanced and drinking incredibly well now but could only improve from some time in the cellar. 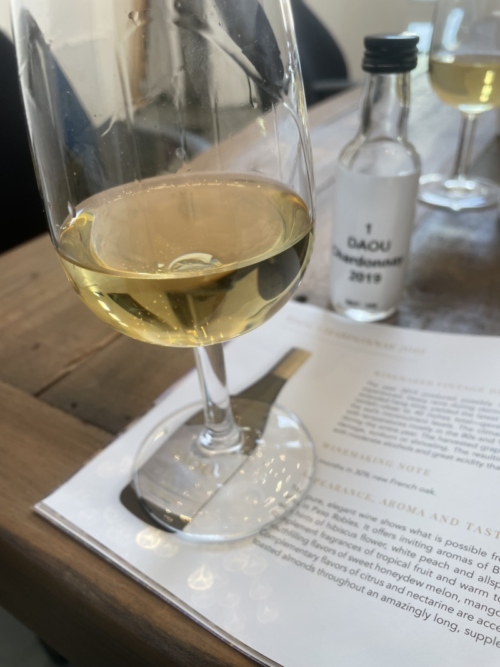 Impressively, as Daniel explained earlier in his presentation, this is the number one sold Cabernet Sauvignon in the United States in the luxury category. 2018 was an exceptional vintage despite a long heat wave with exceptional aromatics and acidity, and perhaps the longest growing season on the mountain. The reds from this vintage are densely coloured, concentrated and silky. Made from free-run juice only, the wine spent about 10 months in 50% new oak. Soft, ripe and generous on the nose, and certainly not overripe, it features notes of creamy raspberry ripple mingled with darker fruits and dried herbs. On the palate it is generously fruity and well-built, with present and smooth tannins. Plenty of weight, it is warming without being hot. Very consumer friendly and deceptively drinkable.

Also from this long and exceptional vintage, the Reserve has spent 22 months in 50% new oak. On the nose it features darker fruit than the last wine with more spice and slightly more development. Confit blueberry, boysenberry, plum and cherry all feature alongside a hint of vanilla and lilac. Dense and firm on the palate, the tannins are ripe and smooth. The refreshing acidity is evident alongside its generosity and richness. 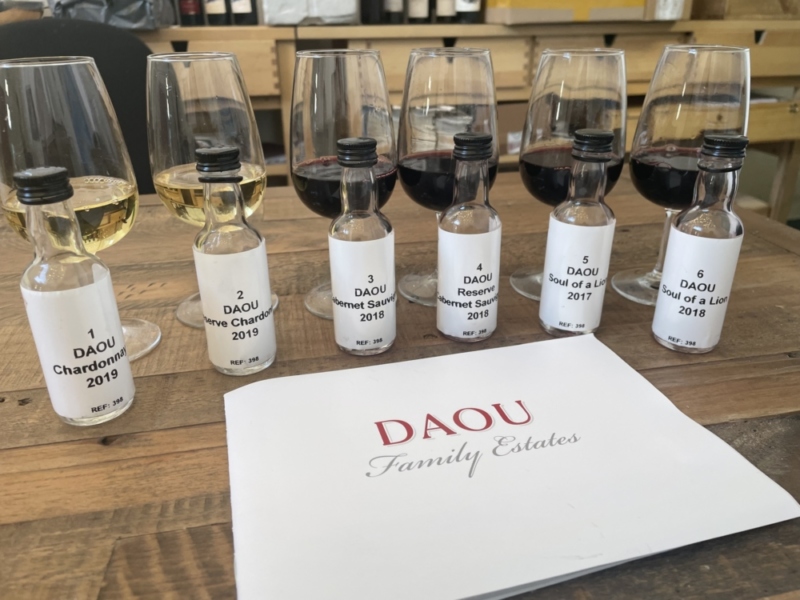 DAOU Soul of a Lion

Soul of a Lion is DAOU’s flagship bottling, and as Daniel explained earlier in the event, it has outsold every Napa wine in California in the last two years except for Opus One. Before we began tasting the two most recent vintages of these wines, Daniel recounted the inspirational and touching story behind the name ‘Soul of a Lion’. The wine is a testament to Joseph Daou and his determination and courage, who instilled in his sons the belief that when life is at its most difficult, you can always come back to the top with the ‘soul of a lion’.

This iconic and revolutionary wine has, as Daniel notes, changed the way that Paso is looked at as a wine region, putting it on the world stage as a leading source of Cabernet Sauvignon. It is made from 100% estate grown fruit from DAOU’s best vineyards and aged in 100% new oak barrels for 22 months, many of which have been custom made for DAOU from around 12 cooperages. Made from 100% free-run juice, it has some of the highest phenolics in the Cabernet world throughout the planet, not only once but every single year. It retains its freshness and minerality incredibly well, and the longer the wine ages, the more you can taste the soil and its minerals and the less you taste the climate. Quality control is absolutely paramount and meticulous, so as to avoid any risk of TCA. In short it is truly a masterpiece that demonstrates what Daou Mountain can do best.

Densely coloured with a complex nose of black fruit and spice, along with vanilla and earthy incense. Undertones of something herbal, perhaps pipe tobacco or forest floor, mingled with mocha and chocolate. The palate is weighty and rich, with masses of flavours and layers of complexity and smooth and fine tannins. The finish is unsurprisingly long, with excellent balance and elegance. To Peter, this is another absolutely authentic Californian wine. 2017 progressed beautifully with much rain which replenished the soils until August when an eleven-day heatwave struck, affecting all of the state. They lost a third of their grapes, but the remaining ones hung until October, contributing phenolic richness, balanced with the minerality of the soil. This is a bigger wine than the 2018, according to Daniel.

Daniel explained that a heatwave also struck in 2018, but rather than in August, it arrived in June before veraison, meaning the grapes were not negatively affected. The grapes hung even later than in 2017, but the wines display more elegance and finesse than the 2017 wines. Perhaps more aromatic on the nose and floral than the 2017, with cedar and pencil shavings, along with baking spices. The palate is in Peter’s words more ‘edgy’ than the 2017, but is still lush and full with black fruits, excellent minerality and well-integrated firm and elegant tannins. When asked by Peter which is his favourite of the two vintages, Daniel claims he tends to prefer elegance over power, so 2018 is the winner for him.

The full recording of the tasting event can be watched below.

Please contact us for more information, availability and pricing.