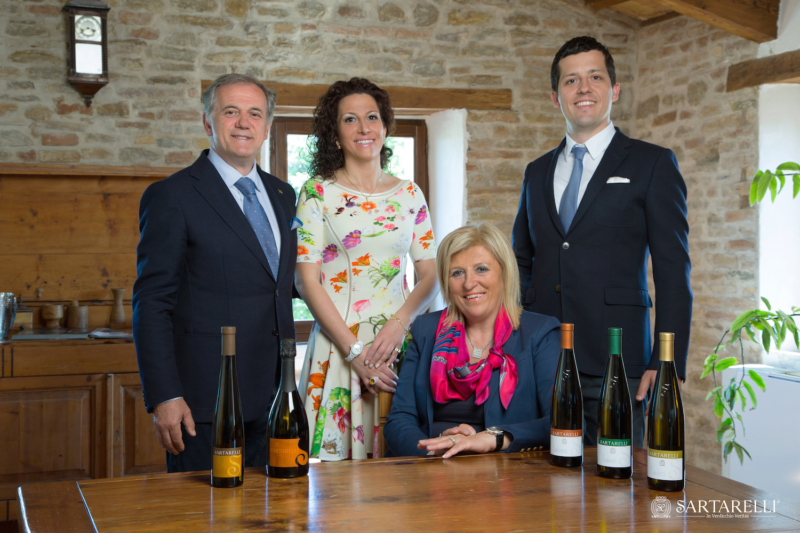 On 13th July, C&C Wines hosted its first monthly virtual tasting hosted in partnership with one of our agency producers. For the debut, this producer was Sartarelli, long-standing Verdicchio pioneers who undoubtedly propelled the variety onto the world stage in 1999, when their  late-harvest Balciana 1997 was awarded both the White Wine Trophy and Italian White Wine Trophy at the International Wine Challenge. In 2020 the same wine (2017 vintage) once again earned Sartarelli the trophy for the best Italian White Wine at the International Wine Challenge.

Hosted by C&C Wines’ Portfolio Ambassador Peter McCombie MW and Caterina Sartarelli, who is part of the third generation of the family, and today runs the estate with her brother Tommaso (the oenologist) and parents Donatella and Patrizio, we started the virtual event with a brief introduction from Peter on the historical origins of Verdicchio, as well as its ups and downs throughout recent decades… 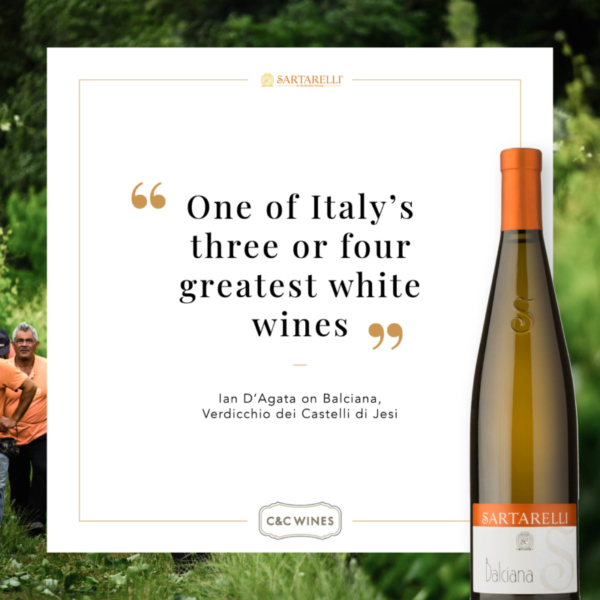 The Story of Sartarelli

The story behind the winery is a fascinating one, and a true demonstration of passion and hard work triumphing over the formerly negative associations with Verdicchio.

A fully family-run operation, it is one of the few Italian wineries which focuses exclusively on a single varietal production. When the winery was started by Feruccio Sartarelli in 1972, Verdicchio was considered a mass-produced table wine, but their focus since then has always been to produce only quality Verdicchio varietal wines, which emphasise and showcase the grape’s best characteristics.

Their winery and offices are built around their century-old country house at 350 meters above sea level. The Sartarelli company, with its extension of 55 hectares of vineyards and 6 hectares of olive groves with 2300 trees, is situated in Poggio San Marcello, a small precious gem surrounded by the beautiful rolling hills of the Marche region.

The Estate is on the left of the Esino River, the traditional area where the wine Verdicchio dei Castelli di Jesi Classico DOC is produced. Here are some of the most historically important Verdicchio producing districts, such as Coste del Molino, Tralivio and Balciana. It is there where their oldest vineyards gently line the distinctive hill slopes of the area. Considering the steep slopes typical of the hills where Sartarelli’s wines are produced, natural grassing is maintained in all vineyards to avoid erosion and increase organic materials.

Due to the property’s smaller parcels and plots with several different exposures to the sun, different micro-climatic conditions, ripening times and therefore differing picking times from the end of August to mid-November, they are able to produce five very distinctive wines at varying times.

Ferruccio Sartarelli, a popular baker first and then an entrepreneur, made the bold decision in 1972 to invest in his biggest passion – to produce a high quality Verdicchio wine. Ferruccio’s daughter Donatella decided to follow in his footsteps, leading Sartarelli with her husband Patrizio, their daughter Caterina, and their son Tommaso, who remains Sartarelli’s winemaker today.

The family and whole company place enormous importance on their passion for wine, are collectively dedicated to producing a quality product that is close to their heart, and each and every member of the team has an important role to play.

They strongly believe that a wine of excellence is obtained by respecting the grapes and vineyard, and respect and care are two core values on which Sartarelli’s philosophy is based. They have always run the vineyards in total respect of the environment, and in 2013 embarked on a new project, Sartarelli.ZERO, cementing their commitment to guaranteeing zero residual chemicals both on their vines and in their winery.

Rather than purchasing clones, they cultivate their own in their vine nursery, and plan to launch a new wine using grapes from it to celebrate the winery’s 50th anniversary next year. For many years they have also used their own copyrighted Balciana yeasts for the production of their Tralivio and Balciana wines.

The Classico is consistently a typical and varietally pure Verdicchio, which is versatile and incredibly easy to drink, and 2020 was an impressive vintage, both in terms of quality and quality. The aromas are led by greenish stone fruit, with a hint of spice, along with hints of olive juice. Incredibly fresh, the palate is more tropical than the nose suggests, with lively fruit. A touch of salinity with a bitter almond twist follows on the finish. Whilst a fantastic drinking wine now, it would age well and develop further for 5-6 years. Peter recommends pairing it with fish and chips, or fritto misto de mare, but it certainly has enough substance and structure to be paired with a range of foods.

This wine is the product of carefully selected grapes in Sartarelli’s best vineyards with an average age of 25 years, and a south exposure to the sun. The first vintage was produced in 1990, making it one of the first examples of a high-quality Verdicchio wine, being made from carefully selected grapes. As a sign of their commitment to quality, they use the same skilled workforce every year who know the best plots in and out. 2019 was a complicated but rewarding vintage.

In contrast to the Classico it is slightly deeper in colour with intense aromas of riper stone fruits and a touch of medicinal acacia notes. The palate is full, with great substance and power, and good acidity. The finish is long and nicely balanced. Whilst delicious now, this could also benefit from some ageing. Caterina suggests pairing it with sushi or grilled meats, asparagus risotto, or truffle, and Peter recommends decanting and serving the wine not too cold to allow its varietal characteristics to sing. As in the production of all of Sartarelli’s wines, they avoid oak and instead use stainless steel to ensure the varietal shines and retains its primary characteristics.

Balciana is sourced exclusively from a single 9.5 hectare vineyard, with a norm-defying northeast exposure, 300m above sea level. The vineyard is so-called after the region where it is located – “Valsana”, or “Valle Sana”, meaning ‘the Healthy Valley’, in medieval times. It was first planted in 1990 and the first Balciana wine as we know it now was born out of an experiment in 1994 when Patrizio Sartarelli decided to leave grapes on the vine for longer than usual.

Harvesting generally takes place in November but picking from the vineyard begins in September, with some of the early picked grapes going into the Classico and Tralivio wines. Patrizio has personally looked after Balciana since its inception, and picking is carried out exclusively by him and one other through 4-5 vineyard passes. The grapes are shrivelled and often include small amounts of noble rot, and as with all of Sartarelli’s wines it is made with absolutely no oak.

High alcohol is an integral and key characteristic of these wines, and what customers expect, but they are consistently entirely balanced and elegant. They usually suggest starting to drink it from 5 years after the vintage, but they will continue to age and improve for 10-12 years. According to Caterina, it is perfect paired with roast goose, duck, turkey, or white meat or fish cooked in a rich way or sauce.

The product of a complicated vintage with several dramatic changes throughout the growing season. Darker in colour than the Tralivio, which is unsurprising. On the nose it is honeyed and exotic, which leads you to expect a sweet wine on the palate, but this is defined by a fully dry palate, adding to the fascinating character of this wine. On the palate, apricot and brio feature with hints of botrytis, and it is rich, full, fruity, complex, and musky but unquestionably dry. This is such an interesting wine, and could be aged for many more years.

This is a lovely golden colour again. Consistently high temperatures and very low rainfall in 2017 led to a 25% drop in yields, but grapes that survived the drought were of excellent quality. Alcohol levels are slightly higher (at 15.5%) than the 2018 (14.5%), and the acidity is marginally lower. The nose features balsamic spice and exotic woods, with power and weight on the palate, but slightly less botrytis characteristics than the 2018 due to the dry weather. In Caterina’s words, 2017 is exactly how Balciana should be.

You can watch our full recording of the live session and tasting below.

You can also find out more about Sartarelli and their award-winning wines here.